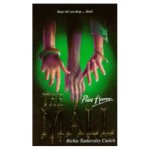 I have an old trunk stored in my shed filled with these books, having collected them from the age of nine or ten all the way through my teens and even now, some ten years later, I’ll pull a random book out, pour myself a cup of Barry’s tea and curl up on the couch to while away a couple of hours.

Some of my favourites back as a kid were Barbara Steiner’s The Mummy, Diane Hoh’s Funhouse, Richie Tankersley Cusick’s The Mall and Freeze Tag & The Vampire’s Promise by Caroline B. Cooney.  The best trilogy was The Forbidden Game by L.J Smith and that’s still one of my most read books as an adult.  What girl can resist Julian eh?  L.J. Smith’s Vampire Diaries series has been re-released thanks to the success of the tv show (which may have got the go-ahead based on the global popularity of Twilight).  The Forbidden Game is also available as a 3 books in 1 paperback.  Similarly her Night World books have been reprinted with covers that bear a striking resemblance to Stephenie Meyer’s Twilight Saga books.

A rival of Point Horror was Nightmares which seemed to be a little more daring in their content, striving for a more adult feel.  The most memorable for me were The Nightmare Inn books written by T.S. Rue.  These were set in the New Arcadia Inn which despite its fun, family oriented exterior seems to exude a sinister and creepy atmosphere.  Room 13 is a ghost story featuring a romance between a bored teenage girl on holiday with her family and the mysterious guest staying in number 13.

I was also a frequent reader of Christopher Pike.  Browsing in a local bookstore recently I saw that The Last Vampire has been reprinted with a new cover.  Sita is an ancient vampire who falls for a highschool boy and when her maker comes to destroy her and mortally wounds her lover, Sita is forced to turn him into a vampire.    Pike’s Road to Nowhere was a darker, more grown up young adult tale than other similar books of that time, dealing with relationships and depression.  Fall Into Darkness differed in that it wasn’t a supernatural story but a murder mystery and was adapted into a film starring the late Jonathan Brandis and The Fresh Prince of Bel-Air‘s Tatyana Ali

Despite the plethora of young adult horror novels that abounded in the 90s, it’s always the Point Horror collection that draws me back.  Maybe it’s the colourful graphics of their front covers, the memories of a delicious shiver running down my spine, or just plain old nostalgia for a simpler time that keeps me casting a protective eye on that old trunk filled with my childhood treasures.  Today the vast majority of my own writing focuses on the supernatural, a genre I grew to love and explore thanks to Point Horror.

Point Horror:  Best Young Adult Books of the 90s? For me, I would have to answer Yes!