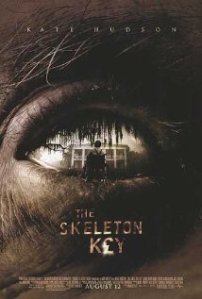 I love reading and watching anything to do with New Orleans, so it’s no surprise I enjoyed The Skeleton Key when I first saw it years ago.  As far as I can remember the critics generally panned it.  And of course when a film is ripped to shreds, I’m always keen to give it a go.  I found the dvd buried in a cupboard recently and had to give this another watch.  I’m glad to say it didn’t disappoint.

Queen of comedy, Kate Hudson, broke from the norm back in 2005 to take the role of Caroline, a young nurse who goes to live and work in a large and imposing plantation house for Violet Devereaux (played brilliantly by Gena Rowlands).  She’s hired to take care of Violet’s elderly husband Ben (John Hurt) who recently suffered a stroke. Kudos to Hurt who has to act almost solely with his eyes.

Violet’s yarn about ghosts in the house and the power of hoodoo (a blend of vodoo, magic and religion) and the laying down of brick dust outside doors (to prevent those who mean you harm from entering), do not impress non-believer Caroline.  She is given a skeleton key for the house and ventures into the dark and dingy attic, where she finds a locked room filled with creepy objects for dark spells, a room anyone in their right mind would leave alone.  She comes to realise that Ben believes his sickness is down to a hoodoo curse.  In an effort to help him, Caroline performs a counterspell, hoping for a placebo effect.  Apparently magic can’t harm you unless you believe in it, which means Caroline is fine as long as she remains skeptical.  She doesn’t!

Spooky and haunting, and set in the backwaters of Louisiana, you can’t beat the eerie atmosphere of this movie.  The Skeleton Key is an old fashioned chiller, a genre I love.  Some may find it slow-moving, but I enjoyed the gentle pace which seemed to underline the easy pace of Southern life.  The murky swamps, bluesy soundtrack, voodoo and local superstitions evoke the sultry and magical atmosphere of the Mississippi, so redolent of other films like Interview with the Vampire.  Moody rain scenes add to the foreboding atmosphere. It’s easy to imagine that the supernatural exists in this part of America.

Recognise this line of trees?  It’s from the Oak Alley Plantation on the Mississippi River 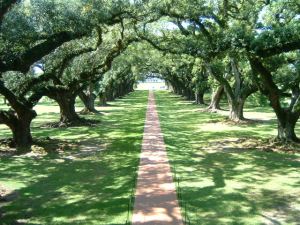 between New Orleans and Baton Rouge.  It was featured in a number of films, including Interview with the Vampire and looks similar to what we see in The Skeleton Key but I’m not 100% sure if it’s the same. Google is giving me conflicting answers.

I probably loved the setting and haunting tone of this film above anything else. If you’re looking for constant jumps and something to make you scream out in fear, this film isn’t for you. On the other hand, if you want an interesting story and an eerie setting, go rent this, and settle in for a delicious piece of spooky storytelling. ****

Check it out on Amazon HERE