Book Review: The Book of Lost Souls by Michelle Muto

Meet Ivy, Shayde and Raven – with names like those, this promised to be a good story 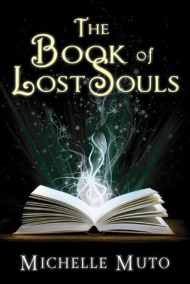 Northwick  is a town filled with humans and supernaturals. Ivy, like any other sixteen year old girl, has a crush on one of the most gorgeous boys at school, Dean. Dean is a bonehead and prefers the company of the bitchy Tara.  What’s a girl to do? Well, if you’re a witch like Ivy, you cast a spell to turn your friend’s lizard, Spike, into a scrumptious human.

Like all the best laid plans, Ivy’s doesn’t work out too well.  Pretty soon everyone in town is whispering that Ivy is just like her father, a user of dark magic. Then the murders begin, and Ivy soon realises someone has gotten their grubby hands on one of the most dangerous, magical books ever, the Book of Lost Souls.  This mischief maker has released scary figures from the past such as Elizabeth Bathory and Vlad the Impaler upon the unsuspecting community, and it’s up to Ivy and her pals to figure it all out.  In the midst of all the mayhem, Ivy grows closer to Nick, who happens to be a demon and is totally in love with Ivy. But everyone knows demons are trouble, so Ivy attempts to ignore her feelings for him, at first.

I enjoyed the characters in the book, well, the supes anyhow, and I couldn’t help but feel awful about the fact that Raven and her brother, Gareth (the latter who is only 14) are going to have to be teenage vampires forever.  There’s something so terribly sad about being frozen at the age of 14. It reminded me of poor Claudia from Interview with the Vampire, trapped forever in the body of a 5 year old.

The moments of comedy had me laughing out loud, and most of these happened when lizardman, Spike, was in the mix. He had me in stitches when he comes face to face with the blood thirsty, Elizabeth Bathory.  She likes to kill virgins and bathe in their blood; it’s good for her complexion, apparently.  Old Lizzie is hankering after her next fix, and innocent Spike asks her if she’s ever tried haemorrhoid cream instead!  The characters have cool names: Ivy, Shayde, Bane and Raven, so of course they have to possess some kind of supernatural gene: witch, werewolf, werewolf and vampire, respectively. I loved the image of smoke rising from the evil book of bad spells every time Ivy opened it and the spiders running across its pages.

Overall, The Book of Lost Souls is wickedly good fun, aimed at the younger scale of the YA audience. ****

Check it out on Amazon HERE

Anybody heard of this one? What did you think?

13 Responses to Book Review: The Book of Lost Souls by Michelle Muto