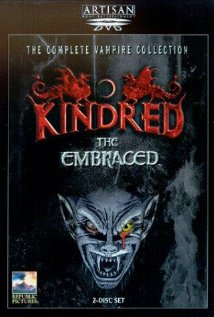 This used to air late at night when I was fourteen or fifteen. Being a vampire-holic even back then, I had to stay up late and tape it. If I went rooting around in the attic, I’m sure I’d find my Kindred tapes somewhere, though I think I only kept the episodes featuring the Romeo & Juliet type characters (more on them later).

Julian Luna is the Prince of the city of San Francisco. He’s a dangerous but honourable vampire and rules over The Kindred, five vampire tribes. Striving to take the city from him is a group of vampires called Brujah. As far as I can remember, there are five vampire bloodlines/clans. I liked to imagine myself as a Toreador vampire. They’re the creative type: artists, writers, musicians, free to spend eternity honing their crafts and having a damn good time all the while.

The presence of the undead in San Francisco does not go unnoticed by the annoying cop, Frank. Really, I wanted some vampire to rip his neck out every episode – he’s that irritating. He’s a little on the slow side, too, completely unaware his partner is a vampire.

Julian has one last human relative left, Sasha. She’s a wild, young thing who falls for one of Julian’s employees, Cash, a vampire of the Gangrel clan. Julian wants to keep Sasha from his world, but of course, that’s going to be impossible. Eventually he gives Cash permission to “embrace” Sasha, but it’s too late. Sasha is viciously attacked by the Brujha clan and turned. Brujha and Gangrel have long been enemy clans, establishing a Romeo and Juliet type of romance between Sasha and Cash. (I apologise to any Kindred fans if I’m spelling any of the clan names incorrectly).

A little trivia now for you. Sasha was played by Brigid Brannagh who made a few guest appearances in Angel as Wesley’s girlfriend. Cash was played by Channon Roe who appeared in the season three episode of Buffy, “The Zeppo”.  Does anyone remember the big, hulking vampire, Luke,  who Buffy went up against in “Welcome to the Hellmouth” and “The Harvest”? Well, his name is Brian Thompson, and he’s in Kindred, too. In fact, he’s responsible for turning Sasha into a vampire. Jeff Kober of the Nosferatu clan was the vampire who Buffy faced on her 18th birthday in the season 3 episode, “Helpless”. He played another character later in Buffy, Rack, the magic guy who gives Willow her first taste of dark magic.

With only eight episodes airing, we never got to fully explore the wealth of vampire activity going on in San Francisco. Mark Frankel, the actor who played Julian, died in a motorcycle accident. If you ever see reruns of this advertised, sit down and give them a watch. Kindred: The Embraced is enjoyable, television fluff.

Did anyone catch this back in the 90s?