The Wind Whisperer by Krista Holle is on tour with Dark World Books. Krista’s here with a guest post “Looks count in every culture”. 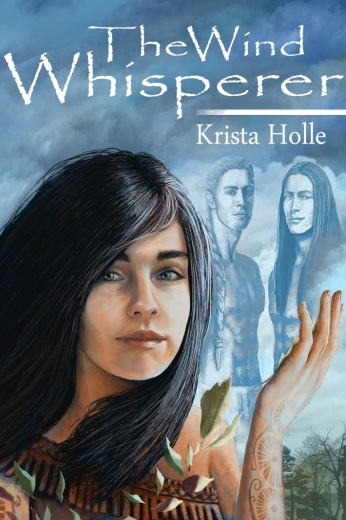 At fifteen, Anaii is the most important member of her tribe—and the most mysterious. Ever since Anaii can remember, the spirits of the wind have whispered of fertile hunting grounds and imminent enemy attacks. But when her people are ambushed by a brother clan without any apparent cause, the spirits remain eerily silent.

As the village prepares to retaliate, Anaii is pressured by her best friend, Elan, to marry him. It’s an old plea—Elan has spent a lifetime loving her, but Anaii only sees a childhood playmate out of an imposing warrior. Stifled by Elan’s insistence, Anaii escapes into the forest where she meets Jayttin, the beautiful son of the enemy chief.

Enamored by Jayttin’s carefree spirit and hope for peace, she repeatedly sneaks away to be with him, but when her deception is discovered, Elan is devastated. Pledging his lifelong affection, Elan gives her a passionate kiss

, and Anaii begins to see her friend in a new light.

While Anaii is tormented over which man she must choose

, the wind whispers of a new threat that could destroy both tribes. Only a union will afford a chance at survival, but the reality of that union is based on one thing—which man Anaii chooses to die.

Looks count. In fact our society is obsessed with beauty and keeping ourselves looking young. During the Renaissance, women plucked their hair so their hairline would be much higher. During the 18th century, it was all about powdered wigs and big black moles. During the 60’s we went braless and makeup free in lieu of a much wilder look. Where’s the common theme? There is none.

So what the heck makes a beautiful woman? This is very difficult to pinpoint since beauty is subjective. If the earth was one big episode of The Simpsons, we’d all think the best life had to offer was lipless, chinless women with exactly four eyelashes!

While researching my newest release, The Wind Whisperer, a young adult novel about Native Americans, I wanted to know what made an 18th century Native American woman beautiful. The answer to this question was as varying as the tribes I ran across. For one U.S. tribe, I discovered that young woman were not allowed to grow their hair long—this luxury was reserved for men only. This custom was so fascinating I adopted it into my novel.

I also learned that most Native American women were tattooed with geometric designs, birds, and flowers. It was a practice that usually began at the onset of womanhood. Most of us have heard the saying that the cost of beauty is pain. Times were no different 400 years ago. A tattoo started with first a painful cutting and then a smearing of black ash. As custom dictates, you’ll find my fifteen-year-old heroine, Anaii, tattooed in several places.

Native American women also loved to decorate their bodies with paint. Think of it as body make-up and applied as faithfully as one applies make-up today. One particular fashion during the 18th century in western U.S. tribes was painting one’s hair part red. Paint was made from egg yolk, clay, blood, crushed sea shell, berries, ect…These ancient women were as innovative with their beauty as we are today.

Just as we adorn with jewelry today to “doll up”, the ancient natives were equally as adorning—but not always in the ways that you think. Of course they used beads and feathers to beautify themselves, but sometimes they also used dead birds, beetles, bones, and strings of human hair. I wonder what beauty treatment we do today will be considered barbaric in 400 years—injecting our faces with paralytics? No judging. Looks count and we’re all obsessing together. 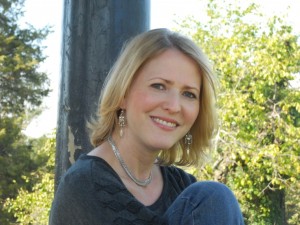 Krista Holle is an award winning author who stepped up her writing after reading Stephanie Meyer’s Twilight series. It occurred to Krista that there is an insatiable audience of women and girls who want to read books filled with stories about true love—not just vampires. When Krista is not writing, she loves to collect seashells, watch movies

, and eat obscene amounts of pizza. Krista currently resides in Montpelier, Virginia with her husband, four daughters and an eccentric cat with a weird attachment to the family’s socks. 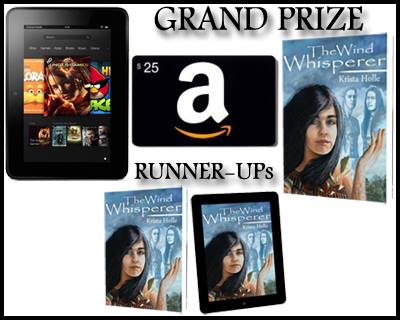 If you fancy entering a fabulous giveaway, click here. Prizes up for grabs are below.

Thanks for the guest post, Krista. Beetles as part of an outfit? Crazy. Good luck with The Wind Whisperer. This is going on my Goodreads list. Native American culture fascinates me.

12 Responses to Blog Tour: The Wind Whisperer by Krista Holle