Given the month that’s in it, I thought I’d write a few spooky posts in the run up to Halloween. Today, I’m going to talk about an eerie place in the city where I live. The Old Cork City Gaol.

The imposing jail opened in 1824 and closed in 1923. Men, women and children were held imprisoned and some were later transported to Australia. In the early 20th century, political prisoners were kept here during the Irish Civil War.

Last year on Cork Culture Night, the one night of the year where almost every heritage site, tourist spot and attraction in Cork opens up to the public for free, I ventured up to The Old Gaol in Sunday’s Well. I’d been there on a few occasions during my childhood, always during the day, and roamed about the corridors and cells either with friends or at my own pace listening to the audio guide. At night, it was quite a different experience.

We got there late enough, close to ten o’ clock as far as I can remember, and weren’t even sure we’d find it still open. But it was. A group of perhaps fifty to sixty people stood huddled close together outside the closed doors. In the dark, surrounded by such an old building with barred windows and turrets, goosebumps broke out on my arms. The atmosphere was one of eager anticipation. A staff member came out, an American lady, and said she was willing to do one last tour, despite the late hour, given the festival night that was in it.

So we lined up and entered and were taken from cell to cell, peering at the creepy wax figures of men, women and children, malnourished, half starved, some of them in jail for simply stealing a loaf of bread to feed themselves, listening to the stories of hardship, the hangings, the transportation of the so called criminals to Australia, and even some tidbits about the prisoners themselves. We saw the scribbled hand writing (now protected behind glass walls), of the prisoners, announcing “James was here 1912” and so on. Most of the jail is closed off, but there is one corridor you can peer down and see the ghostly apparition of a young girl in a white dress with her back to you. This hologram terrified me when I first noticed it as a child, but even as an adult I was aware of a chill running down my spine.

I can’t say I felt any ghostly activity, but given the suffering that went on, I wouldn’t be surprised to hear of the place being haunted. 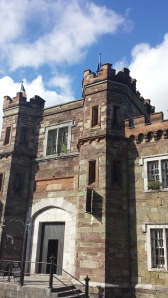 Last weekend, I hopped on board the Cork City open-top tour bus and saw my hometown from a different perspective. We passed the Gaol in broad daylight and I took a few snaps.

view of Cork City from outside the Gaol.

If you ever get to Cork, I’d recommend a trip to The Old Cork City Gaol. You can find out more at corkcitygaol.com

Is this a place you’d like to visit? Do you know of any possibly haunted places where you live?