Not Really but a Girl can Dream Right? 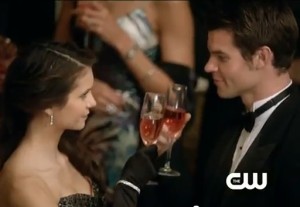 I’m tired of Delena, and even more bored of Stelena, odd because I used to be a big fan of the latter.  Nowadays I’m all about Original Vampire Elijah, played by New Zealander Daniel Gillies.  In real life he’s happily married to Rachael Leigh Cook of She’s All That fame, but in the tv show, Elijah is footloose and fancy-free, as they say.

When Elijah first appeared in season 2 and sniffed Elena to make sure she was human, I sat up and took immediate notice.  Later on in that season, when Elena pulled the dagger from his heart and they found a way to trust one another, I was paying even keener attention.  When Elijah ripped the heart out of Klaus’ werewolf in season 3 and asked his traitorous brother: “So Niklaus, what have I missed?” I clapped.  Yeah, I said it.  I actually found myself clapping.  That was it for any romantic feelings I had for the Salvatore brothers.

Elijah is a noble man, as Elena herself once said.  We’ve never seen him drink blood from a human.  He kills werewolves but he is not sadistic and evil the way Klaus is.  He is honourable and decent for the most part, which is why the audience was shocked when he left Elena trapped underground with his murderous sister Rebekah.  To put this in perspective it’s no worse than what Elena did to him, allying herself with his mother to aid his death.  This act of betrayal earned Elena Elijah’s wrath, but his remorse for this action was evident in the letter of apology he left her. 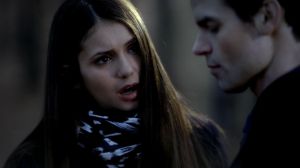 I would like a romance to develop between these two but I don’t see it happening.  Despite the violence, drinking and mayhem we see week after week on the show, The Vampire Diaries has a young audience and a relationship between Elena and a much older man would probably be frowned upon.  Now if they ever made an adult spin off based on The Originals, maybe we would get to see something happen.

I’ve missed Elijah on the show these past few weeks. Let’s hope he comes back to Mystic Falls soon!!

So, quick question. We have Delena and Stelena, what the heck do we call Elijah and Elena?

24 Responses to TV Time: The Vampire Diaries: Elijah & Elena Sitting in a Tree