TV Review: BBC’s Survivors (Post-Apocalyptic England is not a fun place to live)

This BBC series ran for a short two seasons a few years ago. It ended with a hugely irritating cliff-hanger that had fans like myself cursing at the TV screen.  But over the 12 episodes we got to know the motley mix of characters fairly well and wondered how we would cope under similar circumstances.  Similar to the struggle of the gang in The Walking Dead, Survivors is a story about, well, survival in a post-apocalyptic world, minus zombies. It’s real, gritty in places, sinister and entertaining.

The opening episodes show an unknown flu sweeping across the country and the government attempting to keep control by lying through its teeth about a vaccine.  There’s no hope.  Within a few days virtually all the population is infected and over 90% succumb to death.  Those who are left behind wake up in an eerie world of quiet.  Electricity, running water, and law and order have been eradicated overnight.  The cast come together slowly over the hour and half episode.

Leading the pack is Abby Grant (Julie Graham), a mother determined to find her son. She appears to be the only one to have contracted and survived the virus.  Joining her is Greg (Paterson Joseph), a man of strength and honour who isn’t too happy to be reeled into her gang of survivors.  Then we have Anya (Zoe Tapper), a young doctor. Following the deaths of her friends she goes to the hospital pharmacy and finds the right concoction of pills to aid her suicide. In her mind, no one would want to live in this brave new world. She changes her mind and carries on, meeting an injured Tom (Max Beesley) in the middle of the road. 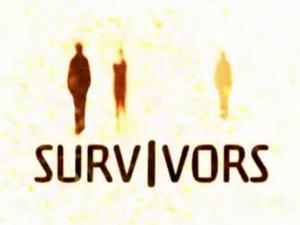 Unbeknownst to the others, Tom is a convicted murderer.  He’s immediately drawn to Anya.  Next up are Playboy Al (Phillip Rhys) and twelve year old Naj (Chahak Patel) who form something of an older brother/younger brother bond.   Last to join the group is Sarah (Robyn Addison), an unlikeable, opportunistic woman who trades sexual favours for protection.  She is weak but dangerous.  Gradually, the horrors of this new world force her to change for the better and along the way she learns to have self-respect and put others before herself.  Tom straddles the line between hardened criminal and protector of his group.  He will kill anyone that threatens them, particularly Anya who tries to resist her feelings for him, recognising the violence within him.

Post-apocalyptic tales have been done before, and probably better.  The original series of Survivors, from the 70s was superior, according to a lot of fans online. I can’t comment as I haven’t seen it, but it finished the story at least. The same can’t be said for the infuriating end to the newer version.  These days we’re used to TV shows getting cancelled prematurely, but the way Survivors was left unfinished pissed me off, and showed a complete lack of respect for loyal viewers.

There’s nothing new in the BBC version of Survivors.  Stephen King’s The Stand covered the struggles of surviving in a post-apocalyptic world probably better than anyone, over thirty years ago.  Likewise Jeremiah and Jericho broached similar themes, but Survivors is still enjoyable. The characters are real, and we feel for them.

We see the best and worst of humanity that only comes to the forefront in times of crisis.  Some of the survivors are vicious, using guns and weapons to protect food supplies and get their way.  What’s left of the government punishes thiefs with execution.  The vulnerability of women and children in particular is made evident.  Tom attempts to press home, time and time again, this is a new, brutal world.  There is no such thing as law and order, and a lot of the time it is a case of kill or be killed.  One menacing, vicious little thug Dexter will have you shouting at the screen. He’s a bully and couldn’t be happier with this new world where he is King as long as he has his gun.

The characters in Survivors are what kept me glued to the TV screen for all twelve episodes.  It’s just a pity we never got one final episode to wrap things up.

Note: Avoid the BBC America version.  From what I’ve read, episodes have been cut and censored.

Has anyone seen or heard of Survivors? Do you like post-apocalyptic shows like The Walking Dead, or are you sick of them?

29 Responses to TV Review: BBC’s Survivors (Post-Apocalyptic England is not a fun place to live)