I posted this review in the early days of this blog when no one knew I existed. 🙂  I watched it again lately, and it was as silly but enjoyable as the first time, so I’d like to share the review again. 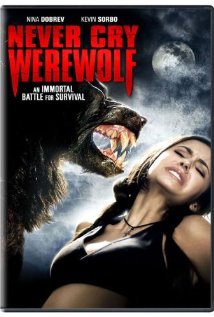 As a made-for-TV movie, and worse having aired on the Sci Fi channel, I had reservations about watching this. 90 minutes later, I was pleasantly surprised. Put aside what will most likely be your tendency to scoff, and just enjoy this little gem for what it is, a comedy-horror that blatantly and enthusiastically rips off Fright Night. Substitute a werewolf for the vampire from the 80s movie and you’ve sussed the plot.

For the ladies, we have the sexy Peter Stebbings from The Listener and Madison (if anyone remembers that show) in the lead role as Jared, the hot, motor-cyclist and new next door neighbour of teenager, Loren played by Nina Dobrev of The Vampire Diaries. It’s hard not to be aware of the creepy age difference between these two, and in fact Jared tells Loren that back in the day, girls her age would have been shacked up with a couple of kids. In a nutshell, he believes Loren is the reincarnation of his dead fiancée, and he intends to turn her into a werewolf to keep her alive as his mate forever. Yes, it is fair to say that Nina Dobrev has developed a taste for playing characters who look like the reincarnation of her love interest’s ex.

Age difference aside, there is something hypnotic about the charisma oozing from Stebbings. Hercules, sorry I mean Kevin Sorbo, plays a washed-up tv star, Redd Tucker, who is roped into helping Loren destroy Jared before he makes her his mate and/or kills any more hookers. Punk kid and fast food delivery boy, Steven (Sean O’ Neill) has a major crush on Loren, and earns himself a bite from the big bad wolf for his wooing efforts.

This film is played for laughs, and it’s clear to see that all the actors amp up the silliness. Was it really necessary to stick Dobrev in a sports bra at the end? Probably not, but I doubt there’re any guys out there who would complain. Kitting her out with a crossbow seemed to be a nod to the legions of Buffy fans, so thumbs up for that.

Cheesy, silly, harmless fun. This is one to watch with your friends on a Friday night with some Jack Daniels in hand, or any other hard liquor.

Has anyone seen this? What other silly Sci Fi/Syfy channel films are doing the rounds that I’ve missed?