Yep, I squealed opening up the first page. It seems like I’ve been waiting years and years for this book, but it’s actually been less than a year. I haven’t been excited by a book series like this since Twilight back in 2008.

Tribane is a hotpot of supernatural activity. When Tegan is out doing some shopping and minding her own business, a riot breaks out, and she is attacked. She’s a tough cookie though, and she’s able to defend herself against the guy pummelling her, a man who moments later looks appalled by his actions. People in the city are going crazy. Something supernaturally deadly is afoot. It’s up to Tegan and Co to put a stop to things.

Tegan’s shacked up with her best friend, Rita, a powerful witch and daughter of the dark sorceror, Theodore. She’s also sharing living space with Finn, the cheeky Irish vampire slayer, her friend Amanda, who is in recovery from her vampire blood addiction, and the silent Ira, who used to be a dog in the last book. Across the road lives her former love, Ethan Cristescu, the Romanian vampire who now seems to hate Tegan for her betrayal in Tegan’s Return. We all know there’s a fine line between love and hate, particularly in these supernatural type books.

The author knows how to tease the reader, to space out the scenes with only Ethan and Tegan, leaving the reader hungry for their next encounter. This is the first book in the series with some seriously steamy sex scenes. Ethan is one of the sexiest vampires to have come out of a book in recent years. I did have a major problem with him in one early scene when he spoke to Tegan in a disgusting matter. I don’t care how angry you are, you never ever call the woman you supposedly love a whore, even if it was in an indirect manner. I almost wrote him off there and then, but he apologises, and Tegan and the reader glimpse a vulnerability in him. Ethan’s flawed, but flawed characters are the most intriguing.

Finn is the other guy interested in Tegan. He’s a loveable rogue, a man’s man, but vampire men win out for me over humans more times than not, and there’s just something intense about Ethan. Just check him out there on the old book cover for Crimson. Nice, eh? 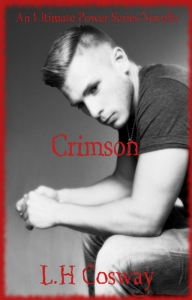 Tegan comes into her own in this book. Her magic is increasing, she learns more about who she is and what she’s capable of. I never thought of her as the damsel in distress in the first place. She was simply more of a regular woman, rather than an ass kicking gal along the lines of Buffy. She’s rough around the edges, and that’s what makes her an intriguing character.

I read this in one day, barely taking the time to go make myself a cup of tea. I loved it. The fourth and final book in the series won’t be out until December. I’ll be very sad to say goodbye to the characters, though I hope the author will publish a short story or novella about them every now and again.

Check it out on Amazon  &   Goodreads.

Have I convinced some of you yet to pick up this author’s books? Anyone who has a major attraction to vamps like I do will love these books, trust me. I have a history of falling for vampires and other supernatural creatures that goes something like this: Julian from The Forbidden Game, Deacon Frost from Blade, Spike from Buffy, Edward Cullen from Twilight, and now Ethan Cristescu from the Tegan books.

I think this Roxette song, “I’m Sorry”, works great for Tegan and Ethan, and it has a moody and seductive vampirey sound.

15 Responses to Book Review: Tegan’s Magic by L.H. Cosway (Screams with Excitement at this book release)