As promised last week, it’s back to talking books on this blog. I previously posted the cover and trailer for Shadow Embraced. Today, I’ve got the author, Cheree Smith, sharing a guest post. 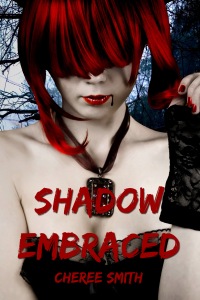 Those words haunt Scar’s dreams. She thinks the creature that terrorises her while asleep isn’t real, but when she’s abducted and taken to a reform school meant to contain creatures too dangerous to function in society, she starts to wonder whether she isn’t some monster.

She turns to an underground fight club full of vampires, werewolves and witches established by the students to control her urges, and who is she kidding, she loves to fight.

When fighters begin to disappear, turning Scar into the prime suspect, she must race to prove her innocence before her true nature is exposed.

The only problem is that she’s not entirely sure she’s innocent.

At university when I took writing courses I was always told to ‘write what I know’, which I always found a bit silly because I write fantasy and horror, but that saying did not seem so silly when it came to picking the setting for where Shadow Embraced would take place in. I’m an Australian author and that’s the place I knew best.

When I was planning for the setting people hated travelling in a car with me, especially when I was in charge of the steering (and the stopping). If I came upon a dirt track that led down into a forest, or a desolated house I always had to stop and take pictures and notes of the location. You will be surprised at how many deserted and crumbling houses there are in the country of Australia.

During Shadow Embraced all of the Australiana is only briefly mentioned, such as Scar being from Sydney, but I am planning for more of our flora and fauna to make their way into the next book. I have already had fun creating a scene involving a herd of kangaroos and ravenous werewolves that takes place at the beginning.

To get a better idea of the setting of Shadow Embraced, here are ten interesting facts about Australia:

Point 5: I’d like to add ex Home and Away actresses, Isla Fisher and Melissa George. I think Home and Away is bigger on this side of the world than in Oz:) Thanks for the post, Cheree

THE PALE GIRL KNOCKS ME BACK AGAINST THE fleshy wall of the crowd with a couple of hard smacks. I scramble away from a woman in a purple dress, my eyes on my opponent. Over the pulsing music, the crowd keeps up their tribal chant:

This is my first time at The Basement – innovative name for a club set up on the second-storey. The dim lights and smoky atmosphere make the graffiti on the walls blaze. Between the pinball machines, sagging lounges, and the close-pressed crowd, there isn’t much room to manoeuvre.

“What are you waiting for?” the girl hisses. She could be Snow White with her porcelain skin and long, raven hair. “You started this. It was between me and her.” She extends one long finger towards my best friend, Alex.

Alex watches from the side-line. This is becoming the norm. Whenever we go out she always gets in trouble and I’m the one to fix it – usually with some bloodshed.

I don’t know what Alex did to piss this poisonous cow off, but now I want blood.

My opponent launches at me. I shield my face from her punches. It all comes down to waiting for an opening. She’s fast, almost as fast as me. It’s difficult to maintain my balance long enough to strike back.

I duck under a right hook and seize my chance. I throw an uppercut and knock her pale ass to the ground.

A single word roars through the room. “Scatter!”

The tight circle breaks and chaos erupts. The girl springs to her feet. The need to fight still blazes in her eyes, but there’s something else emerging as well. Her eyes change to a deep crimson. I stumble back, trying to suppress the cold fear swimming in my gut.

The woman in purple looms closer. Her dress drags along the floor as she moves. Grabbing my opponent by the arm, she whispers something in her ear.

The woman’s gaze meets mine. Her eyes are as white as quartz with a translucent glaze. I can’t take my attention off of her. I hadn’t noticed the long black stick she carries until now. Her body twists in my direction and she pushes people out of the way with her stick as she nears, dragging the girl – who thrashes and screams – behind her. The girl’s red eyes still focused on me.

The room plunges into darkness, leaving only the faint bank of emergency lights marking the stairs.

“Come on, Scar. We have to get out of here.” Alex seizes my arm, forcing me back into reality. She pulls me towards the scattering of kids that remain from the mass exodus.

By the time we reach the exit, sirens howl above the noise. The only means of escape is cut off and people charge back up the stairs, taking refuge on the darkened dance floor. The cops block the exit and seal the room.

A strong hand grips my shoulder and jerks me backwards into a group of girls. I fall to the ground and heavy individuals trample on my legs. A cop forces my hands behind my back and secures them in cool metal cuffs.

He pulls me to my feet and leads me down the packed staircase.

“I’ve got it from here,” a familiar voice says as a hand clutches my shoulder. “I’m sure they still need your help inside.”

“Okay,” the cop says, relinquishing his hold of me. “If you’re sure.”

“I am.” The new cop takes me over to his car and unfastens the cuffs. Opening the back door, he says, “You know, I can’t keep doing this for you.”

I open my mouth to say something, but he cuts me off.

“I don’t want to hear it. We’ll talk about this at home.”

I slide onto the vinyl seat and close the door. “Sorry, Dad,” I whisper.

I lean my head against the cold window of the car door and wait for the car to start up. It takes about five minutes before Dad’s sitting behind the wheel and we’re heading away from the club.

An involuntary shiver creeps up my spine as the image of the woman in purple comes to mind. It really looked as if she was coming for me. I don’t even want to think about what she wanted. Turning my attention to the passing scenery, I shake all thoughts of that woman out of my head.

The streetlights forge speech bubbles of illumination in the air. A faint glow from the moon casts eerie shadows behind the dark clouds. The early morning streets of Sydney are still packed with people coming and going from clubs. Most of the girls look like they borrow all their clothes from their little sisters. The guys, on the other hand, choose a different style; fighting hard to keep their pants from falling down. For some reason, they think it’s an appealing look.

I turn my head to face the back of Dad’s seat. His messy auburn hair pokes out from beneath his blue hat. He takes an occasional glimpse at me from the central mirror.

The car slams to the right as we turn a corner and my heart jerks against my ribs. We stop at the curb in front of an aging two-storey redbrick townhouse. Dad gets out and moves around to my door. He opens it and waits for me to get out – without saying a single word to me.

I glance at the house. Mum stands in the open doorway, and she doesn’t look happy. She still has her nurse uniform on. Strands of tangled sandy hair fall free of her ponytail.

I stop in front of her. “Hi, Mum.” My voice comes out as a whisper.

Mum stares at me with puffy hazel eyes for a moment before turning around and going back inside.

“You’d better get to your room.” Dad enters the apartment and leaves me standing in the doorway. “Your mother and I will speak with you later.”

I force my legs to continue moving, staring at the brownish carpet that lines the floor.

Gripping the banister, I launch myself up the stairs. The scent of lavender and bleach drifting around me brings a nauseous wave to my stomach.

I rush to my room, ignoring the loud conversation coming from my parents’ room, and close the door behind me. All the movie stars and bands from the posters covering my walls watch me with accusing eyes.

Wiping the tears away, I throw myself onto the bed without even bothering to pull the sheets down. Feeling the soft mattress beneath me, I draw my eyes shut. I can only muster enough strength to kick my shoes off before the endless abyss of sleep overtakes me.

The scene plays out as if I’m watching a movie. I stand in a church. Don’t ask me why – I’m not religious, and I’m not even sure if I’ve set foot inside a real one. Thin streamers of light drift through the dirt encrusted stained glass, making spider webs glisten high up in the rafters. The few pews that remain standing sag. The rest is kindling strewn across the floor.

I move down the aisle. The floorboards creak beneath my feet. Each step launches billows of dust through the air. I can see it. A single mirror stands at the far end beside a pedestal that holds a golden chalice. Believe me, I don’t want to be anywhere near it, but my feet have a mind of their own.

The mirror is not normal. Its surface casts no reflection. All I can see beneath the glass is a vast sea of jet-black nothingness, and yet, I know something is hiding there within the shadows. Something that waits for me, watching me. That’s what scares me the most.

‘No escape,’ a voice that doesn’t sound human sneers.

A scent drifts past my nose and makes my mouth water. It smells like cinnamon and honey, but I know it isn’t. My gaze dances around the hall, coming to rest on the chalice.

As I reach out, every nerve screams I must have it. Using my other hand, I try to stop myself. I don’t want it, I only have to tell my mutinous hand that. It won’t stop. I grip the smooth stem. It pulsates with warmth. The thick crimson liquid swirls within the bowl. I raise the cup to my mouth and my heart races as the warm liquid touches my lips.

‘No escape,’ the voice repeats in a low growl.

Interested? I can’t wait to read this. Dark World Books has

A Rafflecopter Giveaway
going on (check out the lovely prizes in the above pic).

Thanks for stopping by, Cheree. Good luck with Shadow Embraced.

Cheree Smith lives in a country town in Australia as a high school English teacher where she writes paranormal, horror and dark stories for young adults. She enjoys listening to and learning about legends and myths, watching scary movies and dreaming up new worlds where monsters can come alive. When she is not in her writing cave she can be found listening to music, even dabbling in the occasional writing of music or reading.