Today I’m taking part in the Cover Reveal for The Corvids: Autumn, the first in The Corvids series by Lisa Ann Brown organised by Dark World Books. With a name like Arabel Spade, I’m already intrigued by The Corvids. 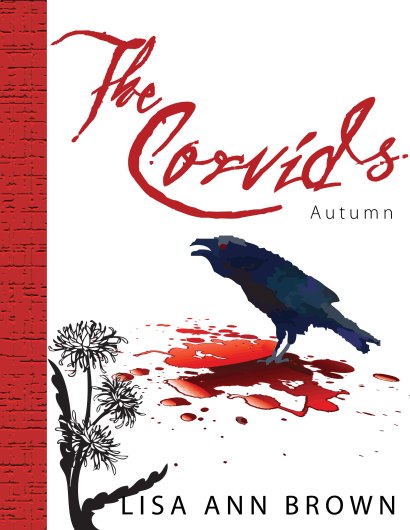 The Corvids is a four-part paranormal romantic suspense series. Delve into the depths of darkness, magic and love in this murder mystery/coming of age quartet!

Arabel Spade, a young girl living in the strange and mystical land of The Corvids, determines to solve a brutal series of murders using her unique paranormal abilities. Through her perilous journey, Arabel learns about herself, the dark secrets which stain her family history and the passions and rigors of first love.

Lisa Ann has been involved with storytelling and entertainment, in one form or another, her entire life. Beginning her creative journey as both a writer and an actor, Lisa Ann spent many years immersing herself in innumerable books, countless theatre productions and earning a degree in Musical Theatre. Shortly after college, she attended the Vancouver Film School to learn the finer points of screenwriting. This study culminated in the writing of a few feature length scripts and an overwhelmingly potent desire to move from Canada to Hollywood. Once ensconced in East Hollywood however, creative inspiration lured Lisa Ann away from screenwriting and returned her to her original writing intentions: to be a novelist. In three months, Lisa Ann had completed her first novel, I Raid, and there has been no cessation of her novel writing ever since. Moving back to Canada, she spent many years working as a talent agent in Vancouver before retiring from the film industry to focus on writing full-time. Lisa Ann derives great personal satisfaction by delivering her characters through the twisting arcs and unexpected tribulations of their imaginary lives. She strives to keep her readers on edge while enjoying the suspense and surprise of their literary journey. She resides in picturesque Vancouver, BC, Canada where she is happily nestled in between the Pacific Ocean and the Coastal Mountain range.