Today I’m showcasing the cover for Ash Krafton’s third book in her Demimonde series, Wolf’s Bane. Check it out below and let me know what you think. Looks simple, effective and pretty to me. I want to read this  – great blurb. 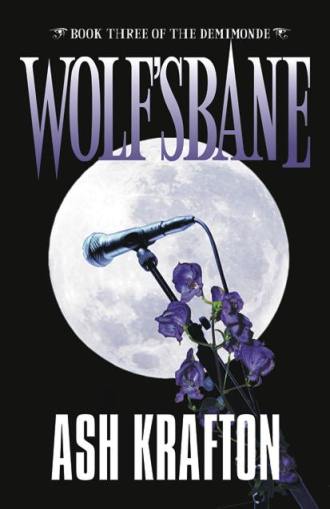 Sometimes, when life gives you lemons, all you can do is try to avoid paper cuts.

Since becoming oracle to the demivampire two years ago, advice columnist Sophie has battled werewolves and survived a vampire attack (or two). However, not only was she powerless to save her lover Marek when he slipped to the brink of evolution, she also witnessed his transformation into a falcon, the symbol of Horus United.

Sophie’s quest to save Marek is further complicated when rock star Dierk Adeluf – who also happens to be the king of the Werekind – invites her backstage after a concert. Just when it seems she will find respite from heartache, Sophie is bitten by a werewolf and Dierk decides she is destined to be his queen.

Sophie is caught between the demivamps she loves and the Were who commands her to love him. Throw in his jealous wanna-be girlfriend—a true bitch if ever there was one—and an ambush by witches, and there you have the big mess that Sophie calls her life. And, hello? Her soul mate is still a bird.

She’s supposed to be the girl with all the answers, but Sophie needs more than a little advice–she needs divine intervention.

Ash Krafton is a writer of all things spec fic. She believes spectacular endings make the best beginnings… Why not? One billion black holes can’t be wrong. Her first novel BLEEDING HEARTS: Book One of the Demimonde is available through Pink Narcissus Press. The manuscript earned finalist distinction in several Romance Writers of America 2011 competitions and has earned several other awards. The follow-up BLOOD RUSH (Demimonde #2) was published in 2013 and the third installment WOLF’S BANE (Demimonde #3) is expected mid-2014. Her urban fantasy novelette STRANGER AT THE HELL GATE is available through the Black Rose line of The Wild Rose Press.

In addition to novel-length fiction, Ash enjoys writing poetry and short fiction, some of which earned awards and distinction in several national competitions. One of her poems was selected as a Pushcart prize nominee. She’s a member of Pennwriters, RWA, Pikes Peak Writers, SFPA, and the Maryland Writers Association. She also contributes to Query Tracker’s blog at http://querytracker.blogspot.com. Ash resides with her family in a rural town in the heart of the Pennsylvania anthracite coal region. She’ll never leave, either, because coal is just another example of a spectacular ending waiting for a brilliant beginning. (It’s kinda fitting.) And because, like a black hole, once you’re in… …you can never get out.