I thought I’d seen or at least heard of every ghost/haunted house film made over the last decade. Somehow Lake Mungo slipped through the net. This Australian mockumentary style drama kept me looking over my shoulder, peering into corners of the room and afraid to glance at mirrors throughout the film, and long after. 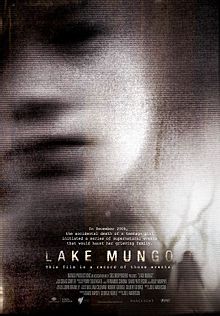 Sixteen year old Alice goes missing during a family picnic while she is swimming in a local dam. Her body is found soon after, an accidental drowning as everyone feared. Her family are unable to rest easy at the house in the weeks and months following her death. Her mother in particular finds her sanity disturbed by terrifying nightmares of her daughter standing at the foot of her bed, dripping wet and staring at her in a silent plea for help.

Now remember, we do not see any of this. The story is narrated in a documentary style with actors portraying an average family. Their performances were so capable, I almost forgot what I was watching wasn’t real. We hear Alice’s mother’s heartbreaking story but we are left to imagine it, for the most part, for ourselves.

The horror elements creep in through photographs and video imagery. A camera in the house seems to capture a shadowy figure moving from one room to the next, and in mirrors it looks like we are seeing glimpses of Alice. Out at the dam where she drowned, people report seeing a girl matching her description wandering about.

As the film goes on, the sense that Alice was harbouring dark secrets in the run up to her death grows. Talking to her friends, the family learn that something happened on a school camping trip to Lake Mungo that spooked her. Mobile phone footage pieced together from her friends’ phones shows Alice leaving the group. Why did she walk off by herself? Why did she come back upset and missing her phone and jewellery? The family go on a trip to find out, and we stay with them step by step.

Okay, one nagging question I had while watching this film was why would a family be making a documentary or participating in something like this? If you find yourself thinking the same, I suggest just look past it and allow yourself to become involved with Alice and her family’s story.

I had goosebumps, shivers crawling down my spine, the hair on my neck standing up at times watching Lake Mungo. I can’t remember the last time a ghost story chilled me like this one did. There’s not that many in-your-face scary moments that make you jump, but there’s an underlying sense of unease throughout. This film is not just a ghost story, it’s a focus on one family’s grief. When you think of good haunted house stories, for me at least, The Conjuring comes to mind. And while that was excellent, it’s an altogether different breed to this. Lake Mungo is genuinely scary and I was unsettled for a long time after watching it.

If you decide to watch this, give it a chance. It may start out slow, but stick with it and the twists and turns will reward your patience. ****

**
Has anyone heard of this? What’s your favourite haunted house movie or book?
**