I tuned in to Roswell in episode six of season one and was hooked.  “285 South” saw wildcard alien, Michael Guerin travel across state lines in search of answers to his past, with ticked off human, Maria Deluca in tow.  An hour later, I was hooked.  I can’t remember how I went about catching myself up with the first five episodes I’d missed, but I must have found some channel showing them because I have every single episode on video tape.  You remember tapes, right? Prehistoric recording devices before DVDs came along.

For years I’d been intrigued with the idea of aliens.  I’d watched The X-Files since I was 10 or 11, seen documentaries on the so called Roswell Incident, watched alien invasion movies like Independence Day, not to mention the yearly Christmas screening of ET in my house, and spent many hours glued to The Discovery Channel listening to people claim they’d been abducted by aliens.  Of course I was going to become addicted to a TV show dedicated to these extraterrestrial beings.  Back in the early days of the show, 2000 I think it was when Roswell made its way to UK TV, I read magazine articles describing it as Beverly Hills with aliens.  So the wrong description.  Roswell was way more sophisticated and witty than the story of rich, bratty kids of 90210.

Roswell came along right at the height of Buffy’s popularity, and I think it suffered by comparison.  The jokes in Roswell were more subtle, the drama and action a little less in your face, but the characters every bit as intriguing and vibrant as those from Buffy.

From watching Roswell, I fell in love with a lot of musicians I had never heard of.  Music was a big part of why Roswell resonated with me.  When I hear songs from the show to this day, key scenes come to mind and I’m right there with Liz (Shiri Appleby) and Max (Jason Behr) , Michael (Brendan Fehr), Maria (Majandra Delfino), Isabel (Katherine Heigl), Alex (Colin Hanks), Kyle (Nick Wechsler), Sheriff Valenti (Will Sadler), and even Tess (Emilie de Raven). I created my own soundtrack, Googling songs after each episode and tracking down the artist in my local music shop.  Sarah McLachlan’s “Fear”, Dave Matthews Band’s “Crash Into Me”, Sheryl Crow’s “I Shall Believe”, Counting Crows’ “Amy Hit the Atmosphere” and Sense Field’s “Save Yourself” will always remind me of Roswell and myself at 16.  Unfortunately, much of the music was lost in the transition to DVD due to budgetary reasons.  If I had known that, I wouldn’t have spent money buying the boxsets. It’s disconcerting and sad to watch a scene and not hear the music you’ve always associated with a specific moment between two particular characters.  For that reason, my boxsets are gathering dust while my video tapes are treated like treasure. 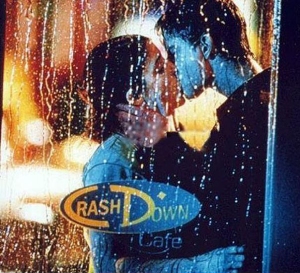 The characters are what made Roswell the quality, intelligent show it was.  Max, Isabel and Michael struggle to deal with being the only aliens in a town that makes its living from the alleged UFO crash.  Their secret is jeopardised in the first few minutes of the pilot when ordinary, hometown girl, Liz Parker is shot in her family owned diner. Max has been in love with Liz for ten years and doesn’t hesitate to use his healing powers to save her life. This act of heroism is the catalyst for the next three seasons which see the aliens begin human relationships and maintain friendships with Liz, Maria and Alex, find out more about where they came from and find themselves hunted down by shady government types.

I cried three or four times during the last, emotional episode “Graduation”, but Roswell ended on a happy note and to the upbeat and cheerful “Shining Light” by Irish band, Ash.

If you missed Roswell, I urge you to check it out.  It remains my second favourite TV show of all time, beaten only by Buffy.

If you’ve watched Roswell, who were you favourite characters, and why?